The story behind the photo 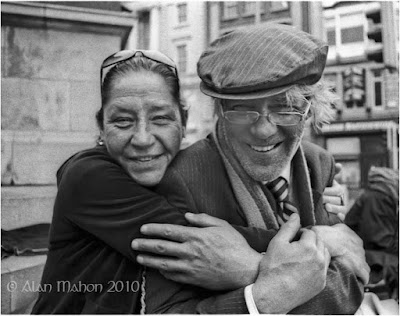 I had booked an 11am slot in Dublin for my digital camera to be serviced on this particular morning.

“We’ll have it ready by 3pm.” the store assistant told me.

I knew I would be spending 3 or 4 hours wandering around Dublin. Walking the streets of Dublin without my camera would be torture for me so, with that in mind, I brought my old film camera with me to pass the time.

I reached O’Connell Street and sat under the Daniel O’Connell monument watching the world go by. After some time an elderly man sat beside me and we started to have a chat. I noticed a bottle of wine wrapped in a brown paper bag in his pocket and assumed that he had drunk from it earlier.

During our conversation, he revealed that he had lived and worked in America for most of his life.

“You know I was great friends with Ted Kennedy.” he boasted. Now that got my interest going as Ted Kennedy was the brother of the late President John F Kennedy, who was assassinated in 1963. Ted Kennedy was also a candidate for the US presidential election until he withdrew from the race under controversial circumstances.

Was this drink talk or was he revealing his true past? I felt he was genuine so I am giving him the benefit of the doubt. I had wondered how a man, who had been on first name terms with high profile Irish Americans, had fallen from grace and was left wandering the streets of Dublin.

I asked him would he mind me taking his photo, which he was delighted with. A short time later I heard, in the distance, with a strong Dublin accent, a woman’s voice.

Hearing the greeting the man smiled and acknowledged the woman whom he clearly knew and were great friends. This woman had fallen on hard times as well and she revealed that they were both homeless.

“Will you take my photo with Jack as well?” she asked. How could I refuse?
“Me and Jack go back a long way.” She added.

I looked at my watch. 3pm. Time to collect my camera.

Email ThisBlogThis!Share to TwitterShare to FacebookShare to Pinterest
Labels: The story behind the photo
Wexford, Ireland Wexford, Ireland
Home
Subscribe to: Posts (Atom)

The story behind the photo

I had booked an 11am slot in Dublin for my digital camera to be serviced on this particular morning. “We’ll have it ready by 3pm.” ...